“It’s late in the evening, the sun has gone down.   The neighborhood is quiet but I hear the sounds.”  I spent the weekend working on It’s a Lonely Christmas Without You.   I somehow managed to delete my project files and had to recreate it, which was a good opportunity to make some changes and I’m pleased with the outcome.  I hope your loved ones are near to you this Christmas. If not, wherever they are I pray they’re safe and sound.

I took the time to re-edit and remix this project and this is the latest version.

Though I was born in Ashland, Kentucky, I grew up in South Florida where music and dancing is a large part of the culture, salsa dancing in particular and finding a club whose live band has a horn section is a common thing.  Hence my love of horns, Latin rhythms and dancing.

As a songwriter I address a variety of topics, but sometimes I like to keep it light, fun and simple.  Life is beautiful so dance more!

I’ve hatched a new one.  This is fresh from the mental factory and there are three main components driving this song.  At Monday night’s Fox and Goose open mic in Sacramento, I heard a performer effectively use the “repeat the same line 4 times technique” and I realized that I typically avoid that technique in my writing.  I like to go somewhere with the story and resist singing the same line.  He challenged me to write a song this week using that approach… so I did!

Carey Seward played Ani Difranco’s, “Both Hands” that night and that’s one of my favorite songs of Ani’s so I wanted to capture just a touch of that element as well.  And finally, another local songwriter, Allison Hallenbeck recently wrote a song with lyrics that impressed me so much I practically fell out of my chair.  So I thought of Allison and her lyric effectiveness as I pulled this together.

Carey is a songwriter from Alaska who has recently joined the music community here in Sacramento and she’s got oodles of talent.  Allison is a ukulele goddess with a sweet soprano voice.  Both frequent several open mic’s around the Sacramento region.

The second verse came first and then came the chorus and then the last two verses and ironically the first verse was the most difficult to write, but it’s so true that it sticks with me like butter.

2 Week Update:  I’ve changed the chorus.  It was too annoying. It’s become: 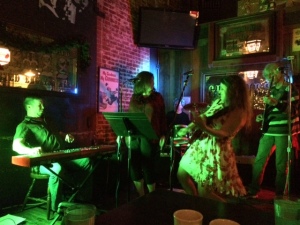 I’m terribly impatient. I want to release these as I get them recorded and don’t have anything keeping me from doing that. Freedom is a beautiful thing. I’ll eventually pull them all together into a CD format and hopefully manage to keep a few songs a surprise.

My family is from Ashland Kentucky and my Granny and I had an especially close relationship.   She was an amazing and entertaining lady.  She would talk about how beautiful Kentucky was and how she ached to return to the land of her roots.

When she was in the assisted living facility she was a hoot.  I was visiting with her one afternoon and she was telling me about what was happening with the lady she shared the room with and somehow we started talking about  Kentucky and she said, “Oh, what I wouldn’t give for some KY bourbon.  Just a taste would be sooo good.”  and I said, “Granny, I can take care of that for  you right now.  There’s no good reason why you can’t have yourself a little swig of bourbon if you want it.”  You could see her eyes just light up at the thought and then she said, “Oh, no…no. I just couldn’t,”  “Yes, Granny, yes, you can.  It’ll only take me a moment to run to a package store and get you some!”  She refused.   It was a funny moment that stuck with me.  So this song is for her.  I tried to capture her passion and love for the state and I accidentally made up a word, which I can fix in editing  – I’m just  not sure I want to.

Give me bourbon on my deathbed
fill my cup, before I die.
In that cup, I place my solace and the
secrets of my life.

Kentucky bourbon on my deathbed
when the bells begin to chime
Oh the devil comes a callin,
If I drink before it’s time.

Give me God that sweet refreshment
it’s like horses running wild
through the bluegrass fields of heaven
as I cross the great divide. 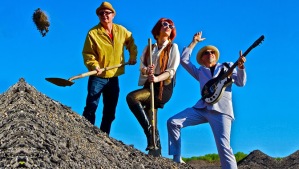 “Just how lonely can lonely be?” by Southern Culture on the Skids is one of the covers I’m learning.   I’ve got it down, guitar parts memorized.  It’s pretty simple, just rooting the words down into my brain so they’ll stick and I can get off the page.  I really like the structure of this song and it fits right in with my material.

I’ve never had much of a memory for certain types of data – the order of presidents, important years of historical events (minus the depression 29-32) have always escaped me.  One thing though that does not escape me is a song.  Especially a song that I’m working on.  I can hear all the parts in my head and when it’s really bad it’s like a pinball machine on tilt.

I had a super interesting conversation with my father recently.  He brought up this story from my past and asked me if I recalled it… I had come home from Neva King Cooper Middle School with a less than stellar report card.  He was displeased.  I was in my parents walk in closet and he was yelling at me.  His exact words were, “What in the hell goes through your head all day?” 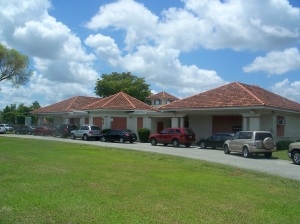 One thing about my father was that he could smell a lie.  And lying to him was akin to an enormous betrayal.  I weighed the consequences and decided immediately that the pure truth was in order.  I looked up at him and said, “Songs.  Songs go through my head all day.”  He looked at me utterly confused and was unsure what to say.  I think at that point I was wanting to audition for Annie so it was songs like, “It’s a Hard Knock Life, Tomorrow, You’re Never Fully Dressed Without A Smile,” etc.  I would hear the melodies and the songs as if they were on repeat.  And it was impossible to get it to stop.  Sometimes it was the last thing I heard as I got out of the car.

Now here I am, three CD’s later, songs placed with publishers and on apps and my dad said to me, “It didn’t make any sense to me back then, but it sure makes sense now.”  And it does.  Perhaps it’s just part of my creative process.  I had a voice teacher along the way say, “It’s not how much you practice but how well you practice. Sometimes the best practice is mental.”  I never have to worry about not having a radio.  😉